Brett Weaver
Akitoshi Okazaki (岡崎 明俊, Okazaki Akitoshi) is a member of the Tokyo Team also known as the Gantz Team in one of their missions, dying in the first he participated in.

Akitoshi is an overweight 28 year old near-sighted male Hikikomori who wears thick glasses. He is also short and stocky with much fat tissue on his body. He has black hair in a simple bowl cut. He wears typical army clothes in a large size, it consists of heavy duty boots, a pair of pants held up with a very large belt and a vest which he wears over a warm T-shirt. He doesn't wear the soft suit.

He is a hikikomori who spends all his time playing violent video games, army based eroges, eating junk food and collecting army lolis. He died choking upon his own food while playing a video game before being copied to the Tokyo Gantz room.

He is initially quick to follow Musō Tokugawa who pretends to know what is going on but when Masaru Kato proves him wrong he immediately stops listening to Tokugawa. He then shows himself to be very obsessed with guns and the military a passion he tries to share with Juzo Togo who ignores him.[1] As the mission starts he shows himself to be both cowardly when he initially hides from the aliens, murderous as he encourages Kei Kurono to kill the alien, sadistic as he takes fun at shooting the corpse of the Rowdy Alien, cruel and psychopathic as he tortures the only alien he manages to take out by shooting him apart bit by bit and very non self-aware and overconfident as he charges at the Daibutsu Alien which kills him.

He is first seen as Kei Kurono is transported into the room sitting on the ground in a defensive position.[2] He ignores Masaru Kato and joins in the praying led by Musō Tokugawa. He is then shown to be surprised when Kato accurately predicts that the Black Sphere will start playing an an exercise tune.[3] He then reads the messages on the screen of the Black Sphere and after it opens he eagerly grabs an X-shotgun.[4] Then as Muso tells them to not to listen to Kato for he will lead them to hell and he convinces people to start praying again he doesn't join in and instead keeps checking out the gun. He then asks Juzo Togo if he likes guns too but is ignored by him.[1] He then watches the confrontation between Muso and Kato and is one of the last people to be sent out of the room to the Rateiin Temple. He is then among those who try to leave but as Shunichi Ike dies he returns to the temple where he shows off his handling of two X-shotguns.[5]

He is then chased alongside the others inside the temple by the Rowdy and Grumpy Aliens and as they attack he tries to hide from them.[6] He then watches surprised as Kurono runs past him to attack the Grumpy Alien.[7] He then cheers as Kurono takes it down and starts shouting at him to kill it.[8] He then follows Kurono as he runs towards the Rowdy Alien and cheers as Juzo shoots it.[9] Then as it dies he shoots its corpse with his double X-shotguns for fun and is told by Jiro Tomashino to stop it.[10] He then remarks that Kurono is very powerful while checking him out. Then as the Smaller Sized Buddhist Temple Aliens attack he eagerly starts fighting them.[11] He is then seen with a wounded alien whose legs have been blown off, he tells it he feels powerful and as it talks to him he wonders if it is begging for its life before he shoots it repeatedly with his X-shotguns.

Then as Kurono is thrown aside by the Daibutsu Alien he eagerly charges at it.[12] But it picks him up form the back making him unable to do anything and shout out for help before the alien brings him towards his mouth while he is shouting he doesn't want to die and to save him. It is however all vain as the alien munches of his head and eats him in three pieces.[13]

He was obsessed with guns and weapons before coming to the Tokyo Gantz room and quickly figured out how to use the ones in it. He doesn't wear the suit but is eager to take and test the guns and fight the aliens, this overconfidence gets him killed. In the end he was only able to take down one of them. Mentally he quickly accepted the situation and was eager to kill stuff. He is physically unfit and has shown no critical thinking skills at all. 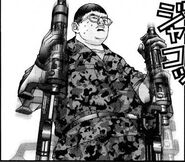 Akitoshi as seen in the manga