Gantz (movie)
The Apartment Tanaka's are seen on the second floor of an abandoned apartment building protecting the Tanaka's Boss and it's offspring.

The Apartment Tanaka's are Tanaka Aliens which seems to be an adults. If we assume they follow normal growing patterns. They wear a robot like Tanaka Shells which looks organic on the outside but is actually metallic on the inside. The shells wear sneakers, white pants, a red striped shirt in the manga and movie and a green and yellow one in the anime. Their true form is revealed to be that of an anthropomorphic bluish purple bird covered in slime in order to fit inside the Tanaka suit. In their bird form they have bulging eyes and a toothed beak, flaring nostrils and a strange ridge attached to their chins.

They were a bunch of Tanaka Aliens (real name of race unknown) they are members of one of the alien species that fled a dying star system, starting 30 years ago. They might have been born here on earth having been raised watching the actual Seiji Tanaka in the seventies when Tanaka had a bit of real fame in japan and even abroad. They confront and surround Kei Kurono after he is forced to go into their lair.

They start out calmly looking at Kei Kurono before their expressions become menacing grins before they start calling for Yuzo. After Kurono calls himself Yuzo they smile at him as if they are happy about this while also calling out random things without a care in the world showing themselves to not be afraid of Kurono in the slightest. They then get increasingly angry at Kurono as he grabs their hatchling and accidentally steps on one, however they do not react beyond that as they wait for their Boss to confront Kurono, by doing this they both show themselves to be capable of restraint and deference to their superior. As their boss get threatened their anger is raised and as Kurono shoots at him they all start firing upon Kurono who gets away by shooting out the floor and the walls. They then hopelessly stand around while the building collapses on top of them showing themselves incapable of quickly reacting to a rapidly changed situation. Most likely they would have been friendlier if their fellows had not been killed and if they were left alone.

The Apartment Tanaka's are first seen as Kei Kurono walks up the second floor of a dingy apartment building that they are using as their lair. We first seen four of them surrounded by Tanaka Alien Hatchlings before they are joined by two more. Then the door opposite of Kurono opens revealing the Tanaka Aliens' Boss surrounded by Tanaka Alien Eggs. The six of them then menacingly grin at him while they step up closer to him while calling for Yuzo. Kurono then tells them he is Yuzo. They then start smiling at him while spouting out random sentences and names like Kantaro, Famous Watermelon Lands and Kagoshima. Meanwhile several Hatchlings have crawled up on Kurono and they start biting him while the Apartment Tanaka's keep saying random stuff. Kurono then grabs the Hatchling that is biting his neck which angers the Tanaka's, who angrily watch as Kurono puts three of them back on the ground afterwards he tries to back out of the hall and accidentally starts stepping upon one of the Hatchlings behind him but quickly realizing his mistake his lifts up his foor, the Tanaka's however all angrily turn at him. While the Boss Tanaka walks up to them and angrily towers over them and Kurono. They look on as Kurono and their Boss angrily look each other down and Kurono puts a gun to his face while telling them he is going to kill their boss.They then all start opening their mouth ready to fire energy shots at Kurono. Kurono then tries to shoot the boss whom dodges, making Kurono hit the roof instead, he then shoots the floor and the walls while they open up fire upon him but before they can overwhelm Kurono he crashes through the floor and runs away while the apartment building start collapsing down upon them all from all around them. They then get buried and killed by the building collapsing down upon them.

In their shell forms the Tanaka Aliens are able to shoot energy blasts from its mouth that can render the hunter suits visible first and unusable second. It also can boil out a person's eyes and send them flying away. It can also fly both while in its Tanaka shell and outside of it. How it flies while in its shell is not known. It is also durable enough to resist quite a bit of pressuring from somebody squeezing its Tanaka shell. They most likely are also intelligent enough to repeat random Japanese phrases and names and observant enough to dodge attacks shot at them. They are however not durable enough to survive a building collapsing on top of them. 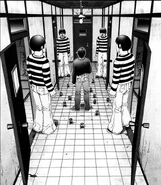 Apartment Tanaka's as seen in the Manga. 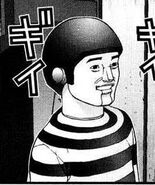