Ayaka Uranaka (浦中 アヤカ, Uranaka Ayaka) was a rape victim who arrived naked, along with the five guys that raped her, after they all died in a car accident. They appeared before the start of the Ring Alien Mission.

She was briefly seen naked, hiding and peeking out, in issue 171, having apparently run off to hide after first arriving. She was seen again in issue 174, after returning with everyone else from the mission, she is seen talking to Reika Shimohira, who she recognized as the famous idol. Reika agrees to let her use her cell phone to call the police.

On the Kill Tae Kojima Mission she has a chance to shoot the rapists, but freezes up, unable to do so.

She participates in the Oni Alien Mission. She forms a group with the remaining rapists and Inaba. They are the first to come across the vampires in the mission, as well as the Oni boss and his executives, and are the only ones to see them all in their full human form. They face the fire Oni executive and he immediately incinerates them all (save for Inaba), killing them instantly, Her head is last seen falling besides Inaba's feet along with the rest of the group's ashy remains. 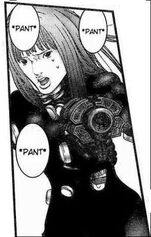 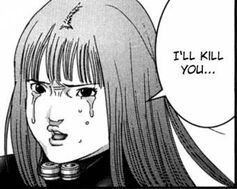