Bob Morris (ボブ・モリス, Bobu Morisu) was one of the four Americans who was summoned to the Gantz Tokyo room after the Shinjuku massacre. It is unknown how exactly he and his friends died. They were part of the Dinosaur Alien Mission.

After Shion Izumi appeared in the Gantz room, Bob and his friends were seen searching for a way to get out, and like most of the other new members, Nathan did not wear his Soft Suit. Coming off as tourists, Bob and his friends spoke English during the entire cause of the mission, heavily criticizing Japan for being "Crazy," as well as wanting to go home. It is unknown if any of the four Americans knew how to speak Japanese.

Near the beginning of the mission, Bob and several other new Gantz Tokyo members was attacked by several Velociraptor Aliens, but was saved when Hiroto Sakurai , Kenzo Sakata and Daizaemon Kaze intervened.

Bob and his friends were later seen seeking cover when Yoshikazu Suzuki and Kei Kurono fought off the T-rex Aliens on the Gantz Bike. When the Kappe Alien made its second appearance, Bob and his friends jumped in hoping to defeat it, but they were all easily defeated, leaving Kaze to finish the fight.

When Kurono finally finished off the Boss Dinosaur, Bob was the first to get killed by the Vampire Bosses. Suzuki later saw one of the Vampire bosses slice Bob's throat, stating that his blood "tastes pretty good!" 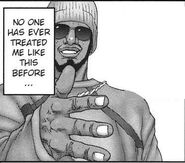