She repeatedly asks Kei Kurono who is reading a Weekly Young Jump magazine, how to get to Hinode Station, he first tells her that she can get from there because he wants to avoid an explanation but she retunrs to ask him confused once again. The second time he tells her to figure it out herself and not to rely on others.

Later Joichiro Nishi tells everyone that they are in a TV Show and that before they came to the Tokyo Room someone spoke to them which left them in a state of hypnosis, Kurono remembers her as the person who spoke to him. 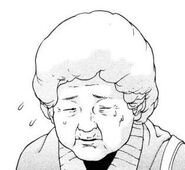 Add a photo to this gallery

Retrieved from "https://gantz.fandom.com/wiki/Chizu_Kumai?oldid=23511"
Community content is available under CC-BY-SA unless otherwise noted.