Gantz (movie)
The Flock of Tanaka's is a group of Tanaka Aliens that attack Kato's group when they are looking for the second Tanaka Alien.

The Flock of Tanaka's are Tanaka Aliens which seems to be an adults. If we assume they follow normal growing patterns. They wear a robot like Tanaka Shells which looks organic on the outside but is actually metallic on the inside. The shells wear sneakers, white pants, a red striped shirt in the manga and movie and a green and yellow one in the anime. Their true form is revealed to be that of an anthropomorphic bluish purple bird covered in slime in order to fit inside the Tanaka suit. In their bird form they have bulging eyes and a toothed beak, flaring nostrils and a strange ridge attached to their chins.

They were a bunch of Tanaka Aliens (real name of race unknown) they are members of one of the alien species that fled a dying star system, starting 30 years ago. They might have been born here on earth having been raised watching the actual Seiji Tanaka in the seventies when Tanaka had a bit of real fame in japan and even abroad. They confront the hunters after one of their own has been killed by them.

They start out angry and aggressive towards the hunters being seemingly aware of what happened to the Shopping Tanaka Alien. Working together the five of them trap the hunters between them after which they start shooting energy blasts at them with murderous intent. They then show their willingness to do anything to win by ganging up by on Masaru Kato who brought one of them to the ground. Then while fighting Kato two of them fly off in order fly down and murder the innocent Sugihara's which they do without showing any mercy to their victims who are a young child and an old lady who wouldn't have done them any harm. After two of them are beaten by Kato's group the final one throws all caution in the wind as he runs back towards them and tries in desperation to get back into its shell before dying. Most likely they would have been friendlier if the Shopping Tanaka hadn't been killed.

The Flock of Tanaka's are first seen as one of them approaches Kato and the other hunters that a with him surrounded by Tanaka Alien Hatchlings. It angrily moves towards them as another one approaches from the opposite side then a third one comes at them from the sky and as it lands they are joined by one more on either side. The one from the sky starts firing at them but is tackled to the ground via bear-hug by Kato whom starts squeezing him out of his shell causing the other four to flies toward him and release their energy shots upon him. Kishimoto then points her gun at one of them who turns around and blows her away with an energy shot. Kato then succeeds at forcing it out of its shell but it runs away from him. He gets up breaking through the other four as he runs down and punches the Tanaka bird to the ground killing it. The other four then come up behind him ready to kill but one of them gets shot and blown up by Kishimoto whom thereby saves Kato's life for his suit had become worthless. The others then turn at her ready to attack but Masanobu Hojo grabs one of them and forces it out of its shell. It then jumps and runs away as the other two Tanaka's whom are still in their shells fly away.

The two whom flew away land in front of Kayo Sugihara and her grandson Ryota Sugihara whom is told to runaway as the two Tanaka's fire upon Kayo. Ryota then comes running back and hugs his grandmother whom despite he broken suit and destroyed eyes is still alive and hugs him as the Tanaka's finish them both off. The remaining bird form Tanaka then comes running back to Kato and the hunters with them and tries to reenter its shell then while it tries to get its entire body in its shell he starts screaching "Hyuu, Hyuu" as it dies being still partially outside of his shell. Kishimoto and Hojo then go to chase down the two to flew away to find them still firing on the long dead Sugihara's. As the approach one of them notices Kishimoto who fires at him while Hojo fires at the other one from the other side, the Tanaka in front of Kishimoto stand up and starts moving towards Kishimoto who is shooting at it, at which point both of them get blown up. Splattering them both in guts and other remains.

In their shell forms the Tanaka Aliens are able to shoot energy blasts from its mouth that can render the hunter suits visible first and unusable second. It also can boil out a person's eyes and send them flying away. It can also fly both while in its Tanaka shell and outside of it. How it flies while in its shell is not known. It is also durable enough to resist quite a bit of pressuring from somebody squeezing its Tanaka shell. They most likely are also intelligent enough to repeat random Japanese phrases and names and observant enough to dodge attacks shot at them. Even so when desperate enough one of them was shown to throw caution in the wind and try to get back into its shell, making it clear that they most likely cannot survive for long outside of their shells. 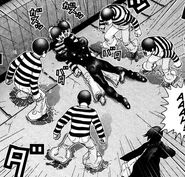 The Flock of Tanaka's as seen in the Manga 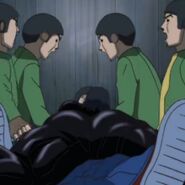 The Flock of Tanaka's as seen in the Anime.

The Fourth and Fifth Aliens 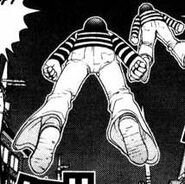 The Fourth and Fifth Aliens Flying Off