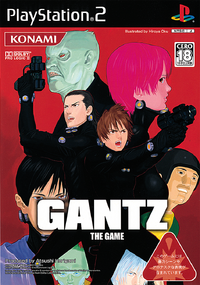 Gantz: The Game is a third-person shooter game developed and published by Konami and released on PlayStation 2 on March 17, 2005 in Japan. It is based on the Gantz series.

It features the characters and plot up to the Buddha Alien mission (though the vampires and the Shorty Aliens are present). The game may be classified as a third-person shooter, although it does have a few Role-playing game elements put together. The game also includes extras including Free Play mode, a Mini Mode, Magazine Browser mode, Gantz Rankings, a special preview movie and the scenario completion statistic. This game was never released outside of Japan.