01. It's the Beginning of a Brand New Day

Paul Sidello
Giichi Furuta (古田 義一, Furuta Giichi) is a bookstore owner who dies chasing a thief down the street and finds himself on a mission to kill Kei Kurono.

An elderly bookstore owner that has been shown throughout the anime. For several weeks in a row, a guy came inside his store to steal/try to steal books he was selling. One night after he stole a book once again, Furuta enraged chased after him, the chase lasts several streets untill Furuta gets hit by a car, driven by a woman who was looking at her cellphone more then she was looking at the road. After she realized she hit something, she just drove off, without looking back. Arriving at the Gantz room he immediatly takes up a leader position urging everyone to remain calm and talk things over. During the mission, Furuta also discouraged violence and tried to talk to everyone, he also showed sympathy towards Hajime Muroto because he believed that he was brainwashed by Ryuji Kajiura. After the death of Naozumi Saitō, he realized that Hajime was never brainwashed or used in any way and that Hajime was just a cold-blooded psychopath. Determined to stop him, he went to confront Hajime, letting Mika Kanda go with him. Just as he was about to shoot Hajime with the X-gun, Hajime grabbed an uzi and shot off Furuta's arms. Making him fall down to the ground unable to defend himself, Hajime took a grenade and stuffed it inside Furuta's mouth, and tied a string to the pin of grenade and tied the other end to Mika's neck, so if she moved, he would die. To torture Mika and Furuta further Hajime took a leather belt from a gun and continued to beat Mika to make her move. Furuta, determined to save Mika pulled away from Mika and blew himself up, seriously injuring Hajime in the process. 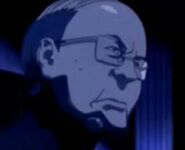