Gantz Wiki
Register
Don't have an account?
Sign In
Advertisement
in: Characters who ever appeared on the Tokyo Gantz team, Male characters, Deceased characters, Characters

Hatanaka is a 38 year old Yakuza member of slightly above average height and weight with short black hair, a five o'clock shadow and mean very slitted condescending eyes. He wears very lose fitting clothes probably in order to better hide his guns. He wears a big purple sweater and pants which are very neat and straight lined while his shoes look very expensive.

He is a Yakuza gangster whom along with his fellow Yakuza Kiyoshi Yoshioka got into a shoot out with other criminals. With both of them ending up getting riddled with bullets and being copied to the Tokyo room along with one of the guns he was carrying.

While initially nothing more than quiet and intimidating, Hiroshi is quickly shown to be cruel, amoral and lustful, as seen when he immediately attempts to rape Kei Kishimoto upon her transfer into the Tokyo room, simply telling the others present to "not come back here".[1] He also attacks the Kid Onion Alien despite him believing that he was simply on a game show[2], and his lack of morality may also be apparent in the fact that he was a member of the Yakuza before being killed.[3] He also demonstrates extreme anger upon Masaru Kato's attempts to stop him, threatening his life and shouting multiple other vulgarities at him before kneeing him in the groin and walking away like nothing happened[4], and he shows a similar lack of patience after Takashi Inamori accidentally points a gun at him.[5]

He is first seen in the Tokyo room as Kei Kurono and Masaru Kato are transferred in. He was uninterested in anything that happened in the room, refusing to say anything when asked his name and way of dying when asked by Masashi Yamada.[6] Then when the naked Kei Kishimoto was transported to the room, he got up and grabbed her telling people not to follow him, showing to everybody there he was not afraid of them as he intended to rape her near six possible willing witnesses, assuming his fellow Yakuza Kiyoshi Yoshioka would not testify against him if it ever came to that. Not expecting anyone to follow him, Masaru Kato attacked him then while fighting with him an exercise song starts playing.[7] He knees Masaru in the crotch while he is distracted and walks of nonchalantly like nothing happened. He then wonders about the alien and what is in the suit cases which lie in the Black Sphere. He is then the first to be transferred out of the room into the Game Area.[8]

Once there he initially intends to leave, until Joichiro Nishi told them they were part of a tv show and that they could win 10 million yen by capturing the Kid Onion Alien. He then shows himself to be very eager to win it, running away with the others to find the alien.[9] Then as Yamada finds the alien, they all surround it and Hatanaka looks down on it calling it a "slimy little bastard". He then demands a gun from Yamada and gets angry at Takashi Inamori as he accidental points his gun at him. As the alien gets more mucus on him he shouts for the director and pushes the alien against the wall for getting it on his jacket. It then vomits making him back off after which it runs away. He gives chase telling to others to stay out of his way.[10]

As they run after the alien Takashi Inamori shoots at it, blowing up a wall behind it instead, he and his partner Kiyoshi Yoshioka then block the alien's path and with the others they surround it. It then tries to fight him but Hatanaka just sways aside but his leg gets cut regardless. The four of them then shoot at it while Kato tells them to stop.[11] It limbs are then blown off covering all of them in blood and guts. Kato ask them what they are doing and tells them that he can't believe they just did that. Hatanaka then deliberately and mockingly blows up the alien's head killing it, spattering them all including Kato with the alien's remains.[12] As the others wonder if it is really a TV show, he tells them he doesn't while picking up the alien's torso saying it moved. He then wonders if it is over. Then he gets angry at Kato who tells a kid who they later find out can't see them to call the police. Then as Inamori assumes they are really dead he angrily tells him to shut up.[13]

The Adult Onion Alien then appears and Hiroshi shows himself to be unafraid asking it what it wants before grabbing its collar and headbutting it. This cracks his skull making him scream that it is like concrete. Then as his head gets grabbed by the adult alien he calmly tells Inamori not to shoot as he tries to apologize to the alien.[14]

It then starts crushing his head, making Inamori shoot at the alien, only for the shot to be blocked by the alien with Hiroshi's own body. He angrily asks Inamori if he really shot him, then for a second he is relieved by the thought it won't work on him before it does, blowing apart his body in a violent fashion.[15] Still conscious and with life in his eyes his head is crushed by the alien, which finally kills him.[16]

Hatanaka can be assumed to be quite skilled in fighting both with his body and mind. Showing himself unafraid to headbutt the alien and with a gun even though he only showed interest in the guns after the others start to find out how to use them. He is very eager to participate in the game the moment he thinks there is some money in it. He is physically fit as is shown when he easily chases down and runs past the Kid Onion Alien. He also seemed smart enough to not make a big deal out of everything and letting fights go. He also is seen as a hardened criminal who has no second thoughts about his actions and he shows himself to be used to intimidating people to get his way. As a Yakuza it can be assumed he is not only proficient with a gun but also with general violence and fighting skills. 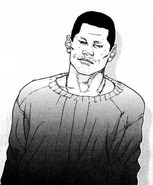 Hatanaka as seen in the manga

Hatanaka as seen in the anime 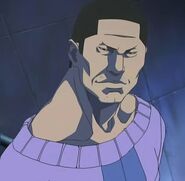