Gantz Wiki
Register
Don't have an account?
Sign In
Advertisement
in: Male characters, Deceased characters, Characters who ever appeared on the Tokyo Gantz team

He has short black hair, and wears glasses. He is first seen in Chapter 190 wearing a suit.

He demonstrates a calm and collected attitude

Appearing inside the room along with supposed co-workers Jouji Morozumi, Manabu Yamaguchi and Masafumi Shirokuma they are told by Kei Kurono to wear the suits although he and the others were at first reluctant they did it without question when Kei said if they did they could be able to go home. Before the transfer starts Kei warns them about the war they are about to enter. After being sent to Ikebukuro he and the others discuss whether to leave or not but Kei easily convinces them to stay. They do not question why and Houchuu is somewhat displeased that Kei referred to them as "old guys". Reika is put in charge of them and they use their tracking devices to find an alien, the confront it only for it to change, Reika open fires and shoots off its arm. However the alien survives and then vomits acid on Houchuu which melts half of his body before killing him

How he and the others died is never addressed nor revealed. Little is known about him other than that he died. 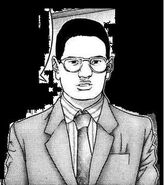