Gantz Wiki
Register
Don't have an account?
Sign In
Advertisement
in: Male characters, Deceased characters, Characters who ever appeared on the Tokyo Gantz team

Robert Anderson
JJ, is an American martial artists visiting Japan. He is very quiet and thoughtful.

JJ stands at the back of the room and doesn't really say anything. He follows the prayer by the priest and that's all he does. After seeing Kato lift up two members of the room to demonstrate the strength of the suit, he challenges him, Kato accepting, and hits him hard to test out how strong he is. He did not put on a suit before they were all transferred to the temple, nor did he bring one along just in case.

He goes along with the others, running with them when the two large statues at the front of the temple come to life and chase them. When all the human size aliens start to appear he starts to fight them using martial arts. He takes a few down on his own. When Kato makes 2 groups he goes with Hojo's group. When most of the group runs inside at the end, to the final building with aliens in it, he goes along with them.

He fights one of the spawns and wins for the most part. JJ gets his hand trapped by the spawn and snaps his bone. JJ head buts him and then another one of the spawn breaks his neck before he has time to recover.

JJ preparing to fight the spawn.

JJs death on the Gantz 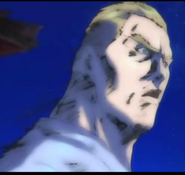 JJ noticing the Buddha Spawns and his thought is 'Jesus H Christ'. Then he fights some.