José Diaz
Jiro Tomashino (苫篠 次郎, Tomashino Jirō) is a member of the Tokyo Team also known as the Gantz Team in one of their missions, dying in the first he participated in.

Tomashino is a cute looking teenager. He is of average height and has a pretty lean body. He has wavy and rough sitting black hair and thick eyebrows. He wears expensive sneakers, white pants, a loose sitting sweater and a long jacket. He doesn't wear the soft suit.

He was a junior high school drop out. He died in a traffic accident while riding his bike in Shibuya.

He along with his friend Yuta Kondo initially follow Musō Tokugawa who pretends to know what is going on and they pray with him.[1] But when Masaru Kato proves him wrong he immediately stops listening to Tokugawa saying his family is Christian anyways. He then shows himself to be annoyed at being told what to do. Kato then lifts the two of them in the air with the power of the suit and they try to kick him to no avail showing himself ready to get into a fight.[2] As the mission start he initially keeps ignoring Kato and tries to leave but when Shunichi Ike dies and the statues come alive he shows himself eager to follow both Kato and Kurono and getting excited by Kurono's actions. He also shows himself to quickly think the worst as Kurono struggled to take down the Rowdy Alien. He also showed a lack of patience as seen when he shouts towards Akitoshi Okazaki to stop shooting the alien corpse.[3] He then over eagerly starts fighting the Smaller Sized Buddhist Temple Aliens nearly getting killed by one of them. He then takes direction from Kato and along with Masanobu Hojo and others comes face to face with Kannon and his Guards and he shows himself to be cowardly as he and his friend Yuta run away leaving Hojo and Sadayo Suzumura behind to die. Then after they put on the suit and take up the guns they show themselves to be very naive and overly confident as they face Kannon who first cuts of their hands which they desperately grab before Kannon restores itself and kills them without much effort.

He is first seen as Kei Kurono is transported into the Tokyo Gantz room looking at him while saying to his friend Yuta Kondo that another one is coming. He then calls him a cosplay queer.[4] He then starts asking questions to Musō Tokugawa.[5] After everyone is brought to the room Muso gets him to pray with him. Then when Masaru Kato accurately predicts that the Black Sphere will start playing an an exercise tune his initial hostile attitude towards him changes.[1] Then Kato again accurately predicts that the sphere is going to open and he eagerly checks out on of the X-guns. Muso then gets angry telling them not to be deceived by tools of murder and he gets him praying again.[6] Then as Kato explains things to Kiyoshi Miyafuji he laughs about the alien part. Then as they get transported out Kato shouts at them to put on the suits while Muso insist that they are being sent to hell and to keep praying. He stops praying stating that his family is Christian anyway. Kato then grabs him and Kondo and with the power of the suit lifts them high into the air they try to kick him but it has no effect but Kato lets them go regardless.[2] This convinces them to take their suits with them as they are transported out of the room to the Rateiin Temple.

He is then among those who try to leave but as Shunichi Ike dies he returns to the temple.[7] He comments on the huge Grumpy Alien before it awakens and chase him along with the others inside the temple.[8] As he tries to get away from the alien it almost manages to punch him with its fist and he scrambles away from the alien frightened.[9] He then watches in awe as Kurono fights the alien and shouts that they can beat them as Kurono is about to win. He then shouts yeah as Kurono kills it. He then excitedly tells the others they can kill them and they then chase Kurono who gets ready to fight the Rowdy Alien.[10] Then as Kurono struggles he quickly changes his mind saying that this one is tougher.[11] But as Juzo Togo kills it he calls Kurono tight. He then tells Akitoshi Okazaki to stop shooting the aliens corpse.[3] He then is the first one to notice the Smaller Sized Buddhist Temple Aliens and is it comes down Kondo tells him to leave it up to him to defeat it. Then while fighting one of them on his own he is surprised to see the Daibutsu Alien rise from its shrine.[12] Afraid of it he wonders what it is.[13] The statue that is fighting him gets the upper hand and starts choking him but before it can kill him it is shot by Togo who thereby saves his life. He then tries to help his friend Yuta who after defeating one of the statues gets surrounded by four of them and Tamashiro flying kicks one of them. It starts fighting him but before the fight can really start it is sniped alongside the others by Togo.[14]

Tired he watches the fight between Kurono and the Daibutsu Alien and as Kurono falls he sees how Akitoshi tries to fight it but gets eaten he then calls it a man-eater and tells the people without suits to stand by him. He then thinks that Kurono is running away as he launches himself into the aliens head to kill it.[15] Which leaves him looking angry but impressed. The hunters then split up in two groups and he and his friend Kondo go with Masanobu Hojo, Sadayo Suzumura and JJ to where Kannon and his Guards are.[16] They then watch JJ getting killed and Hojo tells them to run.[17] But the exit is blocked then Sadayo shoots at one of the guards allowing the two of them to get through the gap of alien and through the door and they run towards Kato, Kurono and the others and tell them there are five of them.[18] As the other go off towards Kannon they go to retrieve their suits and they put them on.[19] They then see the powerful Kannon and think that now that they have the suits on and the guns they can take him on. They shoot at him but it does nothing. It then slices of the hand holding the X-gun. Then as it is about to strike at their necks it gets shot by Togo. They then watch as Togo shoot it apart and he tries to retrieve his hand but finds Kondo's instead who tells him not to throw it away. They then come to the conclusion that if they keep bleeding they are going to die as Kannon restores itself. It then shoots its laser at Togo who dodges before slicing, dicing and icing (killing) him and his friend Kondo. And he falls apart in six pieces while his friend gets sliced in five pieces.[20]

He initially refused to wear the suit but as he sees the danger he is in and what the suit can do he eagerly puts it on, he also quickly examined the X-gun the moment he got his hands on it he however never really got to properly use either of them only managing to shoot nothing with the gun. He also has pretty average fighting skills which are useless against Masaru Kato wearing the suit but do help him survive for a while against the Smaller Sized Buddhist Temple Aliens from which he is saved by Juzo Togo. His fighting style is street based. Mentally he had difficulty believing Kato and accepting the situation he was in and he also showed bad judgement and overconfidence in engaging both the smaller sized aliens and Kannon who kills him. He is physically fit and does have a healthy amount of critical thinking skills. 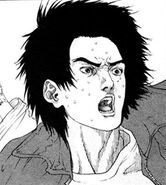 Tomashino as seen in the manga

Wounded Tomashino in front of the temple