074. Slaughter
Kannon is seen for the first time after the Daibutsu Alien is defeated and the survivors split up to defeat the apparently last two aliens in the Buddhist Temple Alien Mission.

Kannon has one of two forms. The first form is a tall golden statue with multiple arms (26 in the manga - possibly more) many of which holds an item such as swords or miniature pagodas, round artefacts able to cause regeneration, and a single vial of acid. Kannon has a peaceful and calm face and has elongated earlobes and wears a headpiece consisting of multiple smaller heads (seven, possibly more).

Kannon's second form is the result of having eaten the brain of Kiyoshi Miyafuji becoming a humanoid biped with six arms and a tail, it also has a long neck, is tall, and like Miyafuji wears glasses

Kannon does not speak or show signs of having personality any traits are entirely up to speculation, i.e. it being remorseless or resourceful due having many items. The only time Kannon speaks is after having eaten Miyafuji's brain. It took on Miyafuji's personality and became boastful about how powerful he had become, he then states that Kannon has questions for Kato asking why he and the other Earthlings treated "them" so badly when they had done nothing wrong. Kannon points out that it is the last one left before concluding that Kato didn't care about anything the statue said.

Nothing is known about Kannon before the mission. In all likelihood Kannon and the other statues are immigrants taking refuge in Earth

After defeating the Daibutsu Alien. The Gantz Team splits up to deal with the two remaining aliens, however when Hojo's team heads to the location to the supposed second alien they find Kannon and his 4 Guards instead. After JJ (a member of Hojo's team) is killed by Kannon's subordinate, members Tomashiro and Kondo escape thanks to Sadayo's distraction to find help. Kannon then begins to move, though Hojo urged Sadayo to flee she remains by his side. Kurono, Kato, Kishimoto and Sei soon enter the temple Kannon is inside only to find both Hojo and Sadayo dead in front of Kannon who has returned to their idle pose and original location. Hojo and Sadayo are both cut in half from the waist up. A distraught Kato charges Kannon. Kannon splashes acid from the vial at him however Kato is saved by Kishimoto's interference however, after shielding him, she is tragically killed. Kato cries as an enraged Kurono charges the statue obliterating it, however due to a round artefact it holds, Kannon regenerates its fatal wounds almost instantly before using the item on Kuruno's leg which begins to eat away at the suit and bone. Kannon also cuts off his arm but before it can kill him Sei saves him though Kannon tried to splash her with acid, she escapes the temple with a wounded Kurono alongside Kato. Kannon soon leaves the temple and is confronted by Tomashiro and Kondo who are now both wearing Gantz suits and are armed with X-Guns, they are both then disarmed when Kanon cuts off both of their hands. Kannon is then destroyed by the team's sniper Juzo Togo however the victory is short lived as Kannon revives, Juzo shoots it again destroying its body completely but to his shock Kannon revives itself before shooting rays of lights from its miniature pagodas before dismembering Tomashiro and Kondo simultaneously with its swords. Juzo escapes Kannon before it discovers wounded Kurono and Sei. Although he urged her to run Sei fights Kannon. She disarms a sword before kicking the vial of acid into the air which proceeds to melt half of Kannon's body. Unlike before, with the round artefact now melted Kannon cannot regenerate its wounds. Sei believes she has won and aims the X-Gun at Kannon before it unexpectedly shoots her with the pagoda's light; piercing her chest and heart before cutting through her shoulder. Her death is almost instant. Upon killing her Kannon stands over Kurono and simply leaves him. While passing by the dead Daibutsu Alien Juzo exits its destroyed head - stabbing Kannon with a lance, thought to be used by one of the Smaller Buddhist Alien Statues though impaling Kannon, it does not kill it, Kannon aims the pagoda at Juzo but he dodges before putting Kannon in a chokehold. Kannon proceeds to choke however holds the pagoda to him again, Juzo releases his grip before attempting to flee but has both legs cut off by the beam of light before Kannon finally kills him by piercing him through the brain. Kannon is not seen until later, sneaking upon Kato who is now wielding one of its swords. Kannon proceeds to use the pagoda however shoots Miyafuji who had been hiding in stealth mode the entire time, whether Kannon was aware of this is unknown. After Miyafuji reveals his position the alien slices him in half with the pagoda before eating his brain. Kato attacks however is stopped when Kannon begins to speak. Kannon has absorbed Miyafuji and his mannerisms and pleads that Kato doesn't shoot. Miyafuji speculates that Kannon wanted to talk to the last survivor stating there was no brain indicting that Kannon was incapable of speech before. Miyafuji reveals that the monster has taken his voice and memories and was wanting to sneak attack it but was killed in the process however he isn't upset, rather happy, since Kannon's body is much stronger. Though he requested Kato put his gun down, Kato shoots, Kannon however jumps into the air and proceeds to fight him. Kannon uses the pagoda but misses several times before cutting off Kato's left arm, which was hold the sword. Kato shoots again with the Y-Gun capturing the deadly alien that eliminated almost all of his team. Kato sends Kannon up despite Kannon's pleas however Kannon proceeds to remove its own head before a strange creature exits the neck. The long humanoid like biped features six arms with a long tail and neck. It's most notable feature is having Miyafuji's face, it then picks up his glasses and fights Kato. It appears that he is no match and is wailed on by the creature, he does land a punch but is then assaulted with more hits. Kato picks up the sword (his hand and arm still attached) and cuts off Kannon's every hand before cutting off it's head, killing it, finally, but not before impaling Kato on its tail, killing him in the process as the body dies.

The many-armed alien wielded swords, miniature pagodas that fired energy beams, and a vial of acid, all of which easily penetrated the hunters' suits. It was also capable of ingesting human brains and accessing their memories and language. But perhaps its most deadly weapon was a disc-shaped artifact that allowed for instant regeneration from whatever wounds the alien incurred. Most of the team fell prey to this particular alien. It is also shown to have other capabilities such as speed or the ability to jump. 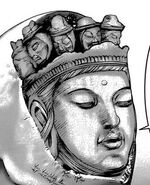 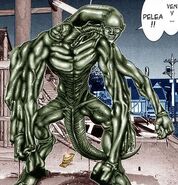 Kannon's second form in the manga.

Kannon's second form in the anime.