Gantz Wiki
Register
Don't have an account?
Sign In
Advertisement
in: Female characters, Characters who ever appeared on the Tokyo Gantz team, Deceased characters

Keiko Morino (森野 恵子, Morino Keiko) is a one of the hunters chosen by Gantz. She participates in the Dinosaur Alien Mission.

Keiko becomes frightened when the raptors attack the hunters that she gets bitten by one of the raptors and gets her arm gnawed off. Although her friend tries to save her, she is ultimately killed when a second raptor tears her head off. 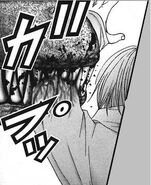