Sho Igarashi
The Kid Onion Alien (, ?) is the first alien shown in the series, he is also the first target identified by the Black Sphere.

The Kid Onion Alien is a Green Onion Alien which seems to be a preteen if we assume their aging follows normal evolutionary principles. He has light green skin and red lips. It has pointy spikes on his skull from which his dark green hair sprouts. He wears an orange shirt, brown pants and white bathroom slippers and carriers a green onion with him.

He is a Green Onion Alien (real name of race unknown) he is member of one of the alien species that fled a dying star system, starting 30 years ago. He might have been born here on earth the child of Alien Immigrants from the before mentioned star system. He was just living his life with his assumed father the Adult Onion Alien when they were made targets in the Gantz Game.

He originally seemed unafraid and more curious and annoyed then anything else, then when he got chased he showed himself to be fearful and eager to solve things by offering people his onions and apologizing to them. Based on his stats it can be assumed that when he is not hunted to be killed he is friendly calm and eager to make friends.

The Kid Onion Alien is first seen on the screen of the Black Sphere as the target of the mission alongside some basic facts about him like his characteristics (strong, smelly), likes (onions, friendships) and his quote: "Onions are enough for me!!" The sphere told the people in the Tokyo room to go out and defeat it before sending them away one by one. He is then first seen opening an apartment door in Masashi Yamada's face, who looks at him before being noticed by Takashi Inamori who shouts out they have found him, at which point Yamada grabs his arm saying he won. It initially just calmly chews on his onion, then when the four of them surround him it starts sweating and releasing steam from his ears saying ""Two is enough for me." He then tells them that onions are enough for him while getting mucus on them. Inamori then is about to shoot it but stops as he looks at its strange skeleton. It then gets more mucus on, which gets Hiroshi Hatanaka to slam him against the wall making him vomit on them and himself after which it runs away from them by first running up the stairs to the apartment there and then jumping away from them from a railing, landing right in front of Kei Kurono, Masaru Kato and Kei Kishimoto.

Kato then tries to help him asking him if he is okay, helping him up while saying he shouldn't move. It then runs away in fear holding its head as the others come for him and keep chasing him. As Inamori corners it, he tells him he will give him his onions. It then dodges his shot and runs away only to be stopped by the Yakuza Hatanaka and Kiyoshi Yoshioka. It then gets cornered by the four of them and it then grows some clawlike razor sharp nails from his right hand and he strikes Hatanaka, ripping his pants and making a cut in his leg. Then the four of them all shoot at him while Kato tells them to stop. Then his right arm gets blown off, he then tells them he will give them his onions as his other arm gets blown off too, followed by his legs. Splattering them all in guts and remains. Kato stunned asks them what they are doing saying they need to call an ambulance. Hatanak instead crouches down and deliberately put his x-gun to his head asking Kato if he got a problem. It then says something in its native tongue before Hatanak blows up his head, killing it. Kato then laments about the fact how he couldn't save him.

Yamada then checks his remains which makes him vomit after which Hatanaka then picks up his torso saying it moved. The Adult Onion Alien then shows up and sees his son remains and he starts crying as he grabs his son arm. The remains of him are then show throughout the following confrontation and later both him and his remains are shown in flashback.

The Kid Onion Alien is able to produce razor-sharp claws from his right hand, which it uses at one point to wound Hatanaka in self defense. The length of these claws is considerably shorter than those of the Adult Onion Alien.

In addition to these offensive capabilities, the Kid Onion Alien also produces a thick, green, mucus substance from his orifices and wounds that are used as a make-shift defense in his first encounter with the Yakuza member that assaults him. After evading the humans by vomiting this mucous, the Kid Onion Alien survives a fall from several stories up with no more than a battered face and bloodied nose. This may suggest some significant durability—due to his thick bones. He also was intelligent enough to know some Japanese words besides his own language.

The Kid Onion Alien as seen in the manga

The Kid Onion Alien as seen in the anime

The Kid Onion Alien as he appears in the Movie. 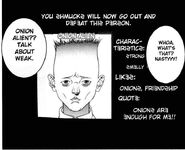 The Kid Onion Alien as seen on the Black Sphere as the first target. 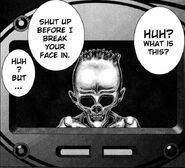 The Skeleton of the Kid Onion Alien

Character Design of the Kid Onion Alien for the Anime