Victor Carsrud
Kiyoshi Miyafushi (宮藤 清, Miyafuji Kiyoshi) is one of the people summoned to the Tokyo room at the beginning of the Buddhist Temple Alien Mission.

Miyafuji is a skinny man with glasses.

Unlike the other new participants. Miyafuji is sceptical towards Musō Tokugawa when told about his supposedly demise.

Unlike the others, he wears the Gantz suit from the get go, and quickly gets excited about the mission. During the course of the mission, he trains himself in using his suit.

He mysteriously disappears during the mission, having learnt how to turn his suit invisible. At the final battle with Kato, it was revealed that he was swallowed and possessed by Kannon. He gets killed by Kato when he was in alien form. 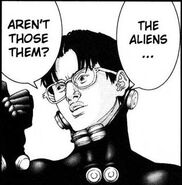