Manabu is one of four new arrivals (not counting Takeshi) before the Oni Alien Mission begins how they died is unknown. All four are convinced to wear the suits when Kurono Kei tells them that if they do they may go home. Kei gave a brief warning about what they were about to walk into before the transfer begins. After being transported to Ikebukuro he and the others contemplated on going home, Manabu remarks that his wife will laugh when she sees him wearing the suit. Kei stops them from leaving, leaving them in Reika's care.

Upon finding one of the Aliens they confront him, but before they can shoot he transforms. Reika fires and shoots of his arm before he spews acid, striking and killing Houchuu. Reika immediately avenges his death by blowing off it's upper half however the alien remains alive and flees. Manabu and the others are left behind as Reika chases after it. Surrounded, Jouji surrenders but is killed when an alien spews acid over him. Only Masafumi and Manabu remain but are spared.

The shapeshifting alien on the mission kills Manabu by entering his ear. Manabu begs not to be shot, despite outlasting the three other men he arrived with he is killed when the Oni boss forms a large bulge in his stomach before transforming into an elephant breaking out of the host utterly crushing Manabu under it's weight. 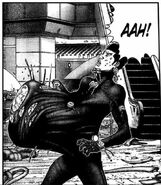 Add a photo to this gallery
Retrieved from "https://gantz.fandom.com/wiki/Manabu_Yamaguchi?oldid=20752"
Community content is available under CC-BY-SA unless otherwise noted.