John Swasey
Musō Tokugawa (徳川 夢想, Tokugawa Musō) is a Buddhist priest who is summoned to the room during the Buddhist Temple Alien Mission.

He tried to explain to everyone that the room a was a place of trial where the fates of their souls would be determined (whether they would go to heaven or hell). He dismissed the warnings of the more veteran players of the game, including Kato and Kurono, thinking that they were either delusional or that they would lead him to hell. He proved to be quite cowardly when exposed to danger or fear, panicking when he was left alone in the room just moments before transferring outside and again when attacked by the Rowdy Alien (not helping is the fact that these aliens took the form of Buddha statues). When attacked, he tried to pray for salvation, and the alien seemingly stopped. This proved fruitless, however, as the alien quickly resumed the attack and crushed him under its palm. 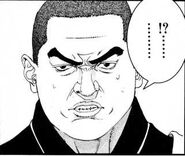