Gantz Wiki
Register
Don't have an account?
Sign In
Advertisement
in: Female characters, Characters who ever appeared on the Tokyo Gantz team, Deceased characters

Rika Shiraishi (白石 リカ, Shiraishi Rika) is a one of the hunters chosen by Gantz. She participates in the Dinosaur Alien Mission.

Rika is quite pudgy and wears quite a bit of make up.

Not much is know about Rika, but what we can take away from her friend Izumi Tatsumi she can be seen as a little dumb and ditsy.

She can be seen as quite cowardly, running away from the area instead of staying there, as opposed to her friend Izumi.

She also may know a bit about media as she recognized Reika Shimohira right away.

Rika is first seen in the Gantz room with her best friend Izumi and was then transported. Like many of the others during the Kappe mission, she didn't bother bringing her suit or any weapons and tried to leave with her friend. She asked her friend if she wanted to go to Shibuya, but panicked after seeing another player's head explode and tried to run, sadly having her own head inflate like a balloon and burst. 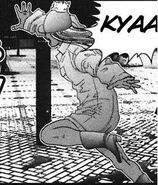 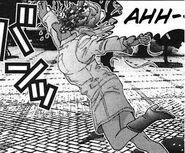