None
Ryota Sugimoto (杉本 亮太, Sugimoto Ryōta) is a member of the Tokyo Team also known as the Gantz Team in one of their missions, dying in the one he participated in.

Ryota is an innocent looking 8 year old of average height and weight with black hair in the manga and very dark green in the anime. He wears regular clothes consisting of a pants, a shirt and a jacket. He and his grandmother are also convinced by Masaru Kato to wear the gantz suit.

He was a regular kid who visited his grandmother for a day only to die in a major traffic accident while she was driving him home. Right before they are killed he talks with his mother telling her that the day with his grandmother was fun. Confused they then end up in the Tokyo room.

Both in the anime and manga he is a scared, crying and whining little kid, which makes him an average little kid in his behavior. When he is not scared, whining or crying he has show to be eager to race the adults or to be reunited with his grandmother. As a typical kid he is very obsessed with himself and his own emotions, not yet having developed the skills to deal with difficult circumstances as the one he finds himself in. He shows genuine concern for his grandmother when he is told to run away from him, even going as far as to return to her after he can't get any help. Overall he is a typical scared little kid.

He is first seen in the car with his grandmother being handed her phone with his mother on the other end of the line whom he tells he had a great time with his grandmother right before a sleepy truck driver runs his truck through and over them killing both them and Masanobu Hojo and Sadayo Suzumura on the motorcycle in front of them.

Arriving in the Tokyo room they wonder what's going on with him crying he wants to go home. Kato then explains what is going on regardless of Nishi's anger. After the sphere in the room opens revealing suits and weapons he and his grandmother confusingly look at them, with his grandmother asking Kato where they are with him answering they should put on the suits saying it will increase their chances of going home. They listen to him and put on the suits. They then watch how Kosuke Nakajima shoots his rifle at Nishi only to have his head blown up by him, which scares him, seeking comfort with his grandmother. Who then gets send out of the room after Nishi and Kei Kurono, at which point he runs for comfort between Kei Kishimoto's tits. He then is the second to last to be transported out of the room leaving Kishimoto's bosom behind to reunite on the outside with his grandmother.

He and his grandmother then bear witness to Nishi shooting one of the Tanaka Alien Hatchlings which gets him in a fight with the Shopping Tanaka Alien. His grandmother then keeps him tight to her, thereby blinding him from the fight. Then as they see the bikers and the other new people leave they follow, as the ringing gets louder, he starts running towards the game line which engages the bikers to follow suit running after him, with Shinsuke Nishikawa overtaking him just to have his head explode thanks to the bomb inside of it, making him run back to his grandmother for comfort. They then go back to where now Kato is fighting the alien, and he is shielded from the action by his grandmother again until it is defeated and they make their way down the stairs to join Kato and the others. He then watches Nishi die and he starts screaming and crying because he doesn't want to die, which causes the remaining two bikers to treating to kill them at which point Kato exclaims that if they want to be free they should listen to what he has to say. Which they do choosing to follow Kato along with the others, while the bikers double back to a left behind Kurono.

As a five men strong Flock of Tanaka's attack Kato, he and his grandmother cower in fear and then run away into a nearby open garage at which point he tells his grandmother he needs to pee, he then takes of his suit showing his naked body while peeing against the wall, right when he is done two of the Tanaka's show up, he then runs to his grandmother who tells him to run away and that she is going to beat them up, he runs away still naked and hears how his grandmother is being killed without doing anything, a policeman then cycles by but seemingly ignores his pleas for help. He then runs back to his near death grandmother who hugs him as they both are killed by the Tanaka's. Only to be discovered moments later by the others.

Ryota shows little fighting skill or ability, instead opting to run away from danger or call for help showing no initiative on his own. He is physically fit managing to outrun several grown ups, he also uses the suit while trying to run out of the game, even so he is overtaken by Shinsuke Nishikawa. He is not the brightest kid and is understandably upset and whiny about the situation he find himself in, he has shown no any other real skills or abilities.

Ryota as seen in the manga

Ryota as seen in the anime 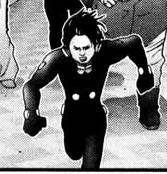 Ryota looking over his shoulder