Ryotaro Haga (芳賀 綾太郎, Haga Ryōtarō) was one of the five guys who gang raped Ayaka Uranaka and died with her during a car accident, before all of them ended up in the Gantz room. He is killed during the Kill Tae Kojima Mission. His hearth gave out after Kei Kurono shot off and blew up his legs making him bleed out which caused the hearth failure. He died right before the transport started. 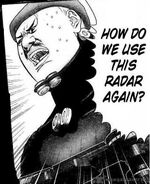 Add a photo to this gallery
Retrieved from "https://gantz.fandom.com/wiki/Ryotaro_Haga?oldid=23788"
Community content is available under CC-BY-SA unless otherwise noted.