John Gremillion
Ryuji Kajiura (梶浦 龍二, Kajiura Ryūji) was one of the two of the characters who killed homeless people for their amusement, and he was one of the 7 characters who was introduced for the filler ending. They sing the same song Gantz does before each mission, as their 'bum hunting' song.

He is able to act very polite and kind when he feels the need to do so. But in reality he is rude and barbaric. He and Hajime Muroto murdered hobo's for fun.

He states to Kei Kurono that he only kills women but he 'could' develop a taste for killing men.

He tries to get the whole Gantz team to fight against Kurono and for them to kill him.

He still tries to get the others against Kurono. He traps Kurono on the 8th floor of the building with the others he tries to devise a plan on how to capture Kurono with the others. He takes Mika Kanda as hostage to get Kurono out of hiding. He and Muroto run off to catch him with Giichi Furuta following. He captures Kurono's teacher and keeps her as hostage and results in him having a knife wound to the head. The others soon realize what he and Muroto are up to and chase after them, only to see Muroto kill Yoshino Uehara. He finds some guns in a building and hides. Kurono shoots one of his arms off.

He finds 6 grenades and straps them to his back ready to explode any time. He kills Daichi Nozaki with a sub machine gun. He is angry that he didn't kill Kurono. Kurono kicks him in refusal and then Ryuji detonates the grenades killing himself and failing to kill Kurono. 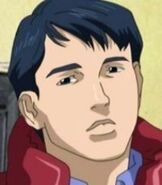