Gantz Wiki
Register
Don't have an account?
Sign In
Advertisement
in: Characters who ever appeared on the Tokyo Gantz team, Playable characters in Gantz video game, Female characters, Deceased characters

none
Sadayo Suzumura (鈴村 貞代, Suzumura Sadayo) is a member of the Tokyo Team also known as the Gantz Team in two of their missions, dying in the second she participated in.

Sadayo is a cute young women whom unintentionally hides her beauty with her common outward appearance which is made worse by her shy and stalkery nature. She has average height and hides her face within her half long black hair which makes her look like the girl from The Ring.

She wears an oversized white dress and white flat shoes in the anime. She also wears the Gantz suit in both missions she went on, under her regular clothes, which both times she dumped during the mission for a while. She appears on the cover of at least one chapter.

Sadayo is a creepy stalker girl who stalks Masanobu Hojo, in the anime this was played of as being a long ongoing thing, while in the manga it is played of as a recent thing. In the anime she is also a student on Hojo school while in the manga she isn't since Hojo doesn't go to school. She dies in a huge traffic accident along with his Hojo whose bike she climbed on to be close to him.

Sadayo has a very shy and possessive nature, jumping on Masanobu Hojo's bike unnoticed by him and then arguing with him before they are killed, even so she is shown to also be a very nice person. This is demonstrated when she helps Hojo hold up one of the Daibutsu Alien's foot saving Yoshino Uehara and her lover in the anime and a random passerby in the manga. She also aids the other players in their escape from the small statues. Suzumura's stalking comes more from her being extremely shy rather than being cruel and perverted. She also does appear to truly love Hojo but is too nervous to approach him, hence her stalking. She is also very calculating in her stalking, such as when she managed to get on the back of Hojo's bike without him noticing. She also knows how to make herself go unnoticed, and is seen covering both her face with her hair and her whole body while watching Hojo. As she starts to open up towards Hojo after getting confidence from being called pretty by him she becomes determined to survive, only to die in his embrace moments later.

She is first seen in a bookstore stalking Masanobu Hojo, as he buys a bike to get away from her, she climbs up behind him unnoticed. Only in the middle of the highway does he notice who is behind him on the bike. She giggles about the fact he never noticed. They then arguing and get killed by a sleepy driver and send to the Tokyo room.In the room she mostly hides and stays out of sight, however she still imitates Hojo by also putting on a suit underneath her clothes. After being transported out she keeps on stalking Hojo from a distance. For most of the mission she is not seen only reemerging when Kei Kishimoto, Masaru Kato and Hojo reach the Tanaka Aliens lair which was just destroyed by Kei Kurono. She is seen after the Tanaka Aliens' Boss attacks Hojo before shifting its attention to Kurono, during this she wears only the suit but after she is transported back she wears her regular clothes over her suit again, when she is given 0 points by Gantz while being told she follows 'Homo' meaning Hojo and disappearing to much. Kurono was unaware of her and Kishimoto points her out, she is not seen leaving the room along with the others, most likely having left last to try and follow Hojo so more. In the anime she is seen stalking him after the mission following him into a movie theater.

She is the fourth returning hunter to be brought back to the Tokyo room being beamed in intentionally directly behind Masanobu Hojo which scare the shit out of him. While Musō Tokugawa takes the lead telling them this is a test she is seen watching from the hallway, being distatched from the rest of them. She changes in her suit alongside the other returning hunters. After being transported out she watches Hojo along with the others from a small distance and she follows them inside Raiteii Temple as the Rowdy and Grumpy Alien chase them, after they are taken care off and the Daibutsu Alien awakens she is seen helping Kato, Kishimoto and Hojo save the life of a random passerby, this makes her inadvertently reveal her face, making Hojo remark that she is cute, which she is. They then get crushed by the alien but thanks to the suit they are all okay, then after Kurono defeats it they find out that there are two aliens left and Hojo is made the leader of group of five hunter including him and her. They go of to Kannon's shrine where Hojo quickly realizes after new hunter JJ is killed, that Kannon and his guards are to strong for those without suits, she then shoots the arm of one of the guards which allows Yuta Kondo and Tomashiro Jiro to get away and get help. Hojo tells them that they are the only ones who can stand up to them, only to lose his weapon, he then knock one of the guards away with the help of the suit, which causes Kannon to come for them, he tells her to flee but she refuses, they then get burned through by Kannon's acid, dying in each others arms while kissing. Kato and the others find them this way, which upsets Kato who charges in only to see Kishimoto sacrifice her life for his. He later lays her to rest next to them, which is the last time we see them.

She shows to be willing to wear the suit just because Hojo decides to wear it. Thanks to imitating Hojo she learns how to use the suit and the basic weaponry of the room. Utilizing the suit she does many power feats and resists many blows. Mentally she quickly accepted and adapted to the situation of the games being eager to help out Hojo and the others to survive with him. She is also willing to take risk and sacrifice herself for others following Hojo's lead. She also is physically fit and knows how to use stealth and become unnoticeable by people. 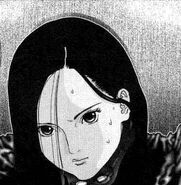 Sadayo as seen in chapter 71

Sadayo's first appearance in the anime. 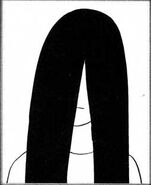 Sadako as seen on the scoreboard.