Kelly Manison
Sei Sakuraoka (桜丘 聖, Sakuraoka Sei) was a member of the Tokyo Gantz Team before dying on her first mission.

Sei is a big breasted 26-year-old woman who closely resembles Angelina Jolie's Lara Croft character in the movie Tomb Raider. She has a slim waist and thin hips and long slightly slender legs. She is very tall, lean, and fit; she also has long black hair which she wears in a braid. She wears long heel boots with long socks underneath, a short skirt, a belt with a skull on it, a hoodie, a sleeveless shirt and no bra. She also wears the Gantz Suit after Kurono's insistence that she should. She appears on the cover of several chapters.

Sei possesses a strong and kind nature. She is also open minded not caring about people liking anime or being otaku. She further shows herself to be empathetic towards a crying Kurono and without any convincing she agrees to have sex with him.

She is pretty confident in her abilities as a martial artist and eagerly helps out the other hunters in fighting the final smaller statue alien. She also shows initiative to help Kurono fight Kannon and his Guards and later save him from them. In the end she is willing to risk it all to go on a date with Kurono and she dies protecting him.

She is first seen as Kei Kurono gets transferred to the Tokyo room. We then see her approach Kei whom has left the room. She asks him if the door in the hallway is the bathroom before she tries to open it unsuccessfully. She then asks him if he is an Otaku and if he likes anime, which he denies. She responds by saying she doesn't have problems with Otaku. She then asks him about the song saying she likes it here better and that Kurono is cute and that seeing him cry touched her a bit. She then tells him to tell her his problems and Kurono asks to have sex with her, she initially refuses but then says its okay. They then start undressing each other partially before having sex. During their intercourse, Sei briefly pauses the moment to question on how they all ended up in this room, and how the sex they are having is so good despite them being dead. Kurono explains to her that they are not dead. As the two of them are talking, Kishimoto walks in on them, and in a very compromising position, but Kurono doesn't care. They then change their position and Kurono tells her they should wear the suits. They then come back into the room together after finishing up, and she gets her suit and changes into it. She then watches as people are being send out then after Kurono is send away she follows.

After appearing at Rateiin Temple alongside the others she is chased inside of it by the Grumpy and Rowdy Aliens. She then watches as Kurono attack and defeats these two big aliens after which she welcomes him back. She then asks him to go out with her once they get out of the game. She then tells him she can drive him around in her car. Kurono then wonders why Akitoshi Okazaki is looking at him and she tells him maybe he is gay and finds him cute. They then look up to see all the Smaller Sized Buddhist Temple Aliens and Kurono tells her he has to go as behind them the giant Daibutsu Alien rises, she wonders if this means heaven or hell. Kurono then tells her he will kill it but as he charges he is kicked away by it. As Kurono tries to fight it again he gets grabbed by it she then helps out the others by shooting its legs. It then stamps towards them making them fall over. She then watches as it is forced to drop Kurono and kills Okazaki. Kurono then joins them but starts walking away, she then sees how he jumps into the aliens head and kills, emerging from its mouth after he is done. She then hugs him saying he must go on a ride with her.

Then as they split up in two groups she tells Masaru Kato that she is going on a date with Kei after they survive. She then alongside Kurono, Kishimoto and Kato surround the final smaller sized alien which gets shot by Juzo Togo as it lifts Kato into the air. They then run towards Kannon where they find he has killed Masanobu Hojo and Sadayo Suzumura.She then sees how Kishimoto die for Kato, then as Kurono charges at Kannon she starts fighting his guards. Then as Kurono gets defeated she comes to his side and asks Kato what to do telling him he is still alive. He then tells her to take Kurono some place safe outside. She then picks up Kurono telling him again he must go for a ride with her. Then as Kannon attacks with his acid she jumps away from it with Kurono. They then lay Kurono down where they think it is safe and threat his stumps by bandaging his arm and shooting his leg which was been burnt away by acid. Kato then tells her that as long as you stay alive no damage you take matters.

After Kato has left she asks Kurono why he wanted to be with her and he replies it was just because she let him fuck her saying who wouldn't. Kannon then comes for them and Kurono tells her to go but she wants to to try fighting she tells him. Saying she has fought in tournaments and practiced self defense. She then asks him if she defeats it if he can love her and Kurono tells her yeah. Then while telling him she will protect him she gets up ready to face Kannon. She then takes a fighting stance and dodges a sword from Kannon several times before managing to kick it out of its hand. Then as it is about to throw the acid upon her she kicks it upwards into its own face. This burns away the right side of its body. It then tries to revert itself but the arm that allows him to do it is burnt away. She then exclaims that she has won to Kurono and as she pulls out her X-gun from her holster and prepares to take the final shot, Kannon shoots his laser at her through her chest before motioning it upwards killing her. She dies with her last word being Kurono.

When Kaze asks Kurono who he wishes to revive, Kurono briefly deliberates between her and Kishimoto. In the end, he chooses neither and revives Nishi Joichiro.

When the Foreign alien that knows everything answers to the alien hunters that humans are just things. To prove it (it) materializes her, the old guy (Suzuki), Kei Kishimoto, and Reika. After meeting Kurono again, she goes and hugs him, only for Reika to get her attention. Sei then asks if she's his girlfriend, to which he agrees and apologizes, and she tells her to look after her. After that Kurono hugs Reika saying he loves her, she then says she loves him too, then all of the revived people are disintegrated by the alien to prove humans are just "things". Kurono (CLONE) being infuriated attacks the alien and was killed without harming it at all.

After Kurono is injured and lying helpless, Sei speaks to him.

After the majority of the Gantz Team fall to the Buddha Temple boss Sei realizes that Kurono does not feel the same way about her - instead he thinks more of the deceased Kishimoto than her. Seeing the boss approach, she asks Kurono if he would love her if she defeated the enemy. Once she receives her answer, she fights against it both solo and with her bare fists. Although Sei is able to injure the alien she is unable to defeat it and she dies defending Kurono.

Sei already was a well rounded and proficient martial artist before coming to the Tokyo room where she shows to be willing to wear the suit after Kei Kurono tells her she should. After seeing Kurono use the suit and weapons to defeat giant opponent after giant opponent she learns how to use them. Then as Kurono is in danger she is seen using the suit for the first time as she start to fighting Kannon's 4 Guards during which she also shows instinct with the X-guns which she manages to use without any difficulty. Mentally she quickly accepted and adapted to the situation of the games being eager to survive in order to go on a date with Kurono. She is also willing to take risk and sacrifice herself for Kurono's survival. 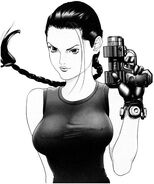 Sei as she first appeared on Gantz chapter 58

Sei's full appearance in the manga.

Sei's design for the anime

The film poster for the film Lara Croft Tomb Raider