043. Unexpected Developments (only its empty shell)

Gantz (movie)
The Shopping Tanaka Alien (, ?) is the third alien shown in the series, he is also the second target to be identified by the Black Sphere, the fact that there are many more of him is however not noted.

The Shopping Tanaka Alien is a Tanaka Alien which seems to be an adult. If we assume they follow normal growing patterns. It wears a robot like Tanaka Shell which looks organic on the outside but is actually metallic on the inside. The shell wears sneakers, white pants, a red striped shirt in the manga and movie and a green and yellow one in the anime. It also carries a shopping bag. Its true form is revealed to be that of an anthropomorphic bluish purple bird covered in slime in order to fit inside the Tanaka suit. In its bird form it has bulging eyes and a toothed beak, flaring nostril and a strange ridge attached to its chin.

He is a Tanaka Alien (real name of race unknown) he is member of one of the alien species that fled a dying star system, starting 30 years ago. He might have been born here on earth having been raised watching the actual Seiji Tanaka in the seventies when Tanaka had a bit of real fame in japan and even abroad. He was returning from buying groceries with a bunch of Tanaka Alien Hatchlings when they were made targets in the Gantz Game.

He originally is calm and composed when he passes Kei Kurono then when one of the Hatchlings bites Kurono and he tries to shake it off. It gets angry and starts chasing Kurono. It then calms down for a second as no more guns are pointed at them then literally flies into rage when Joichiro Nishi kills one of the hatchlings. It then proceeds to follow and attack Nishi until it kills him it then starts fighting Masaru Kato who came to Nishi's aid, before being sent away by Kurono. Before it met the hunters it was happy and content to be out walking with his assumed young. If not threatened it most likely would be friendly and nice.

The Shopping Tanaka Alien is first seen on the screen of the Black Sphere as the target of the mission alongside some basic facts about him like his characteristics (strong, fresh bird), likes (birds, chick-balls) and his quote: "Onions are enough for me!!" The sphere told the people in the Tokyo room to go out and defeat it before sending them away one by one. He is then first seen as Kurono is transported out of the room, walking towards him accompanied by seven hatchlings, three on either side of him and one of his left shoulder. As the transfer completes it walks towards and past Kurono. He then points his gun at the back of its head which is seen by one of the hatchlings. He sees that it has bones and therefore alive as he lowers the gun, one of the hatchlings has climbed upon him and starts biting him in the arm. As Kurono tries to shake the hatchling off, he turns its head and calls out Yuzo. The hatchling jumped back on the Shopping Tanaka Alien when Kurono lowered his arm and it then takes two paces and turns around shouting encouring phrases. It then look friendly at Kurono but it suddenly gets very angry before it angrily follows Kurono to the rest of the hunters. Then one of its hatchlings gets killed by an unseen x-gun shot and it turns around in anger and fires a kind of energy shot at the invisible Joichiro Nishi who becomes visible because of it. It then fires a second shot as Nishi jumps away from it and then as Nishi falls in the river it flies up into the air following him.

Nishi tries to shoot at it as it comes near him but it dodges his shots two times, the second time he is forced into the water and comes straight for him and flies out of the water and aims another shot at Nishi, making him fully visible to the others. Nishi shoots at him but he dodges by going into the water and fires back at him and blows Nishi backwards. It then looms over him and gets close to make a finishing blown when Nishi hits it in the face, sendingh him flying into the wall behind the river. It gets back up angry and starts chasing Nishi through the water whom's suit has now died. When he catches up with him he blows an energy shot in Nishi's face which destroys his eyes. It then shoots at him again hitting him in the stomach as he tries to get away. As he is about to finish him off Masaru Kato arrives and prepares to shoot at him. But he is late to do so but it does get him away from Nishi who then gets saved. He then flies towards Kato who drops Nishi to get away but before he can attack he manages to dodge a shot from an Y-gun from Kurono by flying beneath it while still attacking Kato.

As it puts it mouth next to Kato's head ready to attack, Kato however dives and as it follows they struggle and Kato grabs him around his waist and stand up in the river trying to squeeze the life out of it. Thanks to the suit Kato squeezes the Tanaka suit to breaking point. It starts shooting energy blast into the air before we see a beak in its mouth and then the shells skull cracks open and its true from as a anthropomorphic bird is revealed to the hunters. As it comes out of its shell it starts screaming as we see some kind of slimy lubricant coat his body. Before it can fully escape it shell and get away, Kurono shoots the Y-gun at him pinning him to the ground and making it struggle and scream before Kurono ends it by sending him away. Where we do not know.

In its shell form the Tanaka Alien is able to shoot energy blasts from its mouth that can render the hunter suits visible first and unusable second. It also can boil out a person's eyes and send them flying away. It can also fly both while in its Tanaka shell and outside of it. How it flies while in its shell is not known. It is also durable enough to resist quite a bit of pressuring from somebody squeezing its Tanaka shell. It is also intelligent enough to repeat random Japanese phrases and names and observant enough to dodge attacks shot at him from far away while he is busy fighting someone else.

The Shopping Tanaka as seen in the Manga

The Shopping Tanaka as seen in the Anime 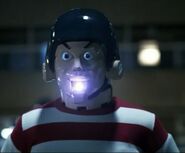 The Shopping Tanaka as seen in the Movie

The Shopping Tanaka squeezed from his shell.