Rick Piersall
Shunichi Ike (池 俊一, Ike Shun'ichi), is a business man from Tokyo who ends up in the Tokyo room.

Whilst in the Gantz room he didn't do or say much. Whilst Kato was pressuring everyone to get there suits on he went up to Gantz and yanks on his face to make sure he is real. Also while Kato was talking about the suits he was praying along with Muso . When Muso talks about hell and that they may be there he is very scared and frightened. However once he is transported outside his visage changes drastically. He becomes cool and calm and insults the Gantz members.

During the mission he doesn't do anything of value to the Gantz hunters. He just realizes that he is outside and that he can go home with Musō, Tomao and Konta following. As he was the first to walk off his head explodes and the other three return to the temple ground. 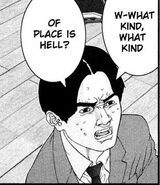 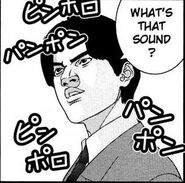