034. Mr. Tanaka
The Tanaka Alien Hatchlings (, ?) are the freshly hatched state of the Tanaka aliens, how quickly they mature is not known.

The Tanaka Alien Hatchlings are freshly hatched Tanaka Aliens. They are about 6/7 CM tall little birds with a width of about 4 CM, they have blue bodies, green heads and purple beaks in the anime while in the manga they have a dark colored body with a white or bright collar and an equally dark head and a bright beak. Their beaks are lined with sharp teeth and their mouths produce a lot of saliva. They also have veiny bulging eyes.

They are Tanaka Aliens (real name of race unknown) they are members of one of the alien species that fled a dying star system, starting 30 years ago. They have been hatched here on earth by other Tanaka's that might been raised watching the actual Seiji Tanaka in the seventies when Tanaka had a bit of real fame in japan and even abroad. They follow the Shopping Tanaka Alien and invest the Tanaka Hideout.

They seem to be very aggressive and protective as seen when they attack people by biting and clawing at them even when they only show the slightest bit of threatening behavior. This behavior however could also be interpreted at possible being their natural playfulness but this does not appear to be the case. They also seem not to be very rational in their behavior when choosing to attack humans whom are far bigger and stronger then them.

The Tanaka Alien Hatchlings are first seen in the lair of the Tanaka Aliens coming out of their Eggs in a small tatami covered room in front of a television with a recording on it of the actual Seiji Tanaka singing a song while surrounded by a bunch of kids. Kei Kurono then encounters 7 of them while being transported out of the Tokyo Room coming towards him along with the Shopping Tanaka Alien. As Kurono walks up to him and points his gun at the Shopping Tanaka Alien one of them bites Kurono who tries to shake it off. They then start chasing Kurono until one of them gets shot and killed by the invisible Joichiro Nishi. Then as Nishi goes to fight the Shopping Tanaka Alien they are no longer seen but after it is defeated by Masaru Kato they are shown being crushed by the bikers next to the river while in the Anime they are seen being squashed by the Zoku Biker Gang on the bridge before the end of the fight. Then another group of five of them is seen with the Flock of Tanaka's. Then one of those five finds the hiding place of Ryota Sugihara and Kayo Sugihara and they are never seen again. Then as Kurono is forced to go into their lair he encounters dozens of them and does his best to avoid them as he walks towards a closed door that opens to reveal the Tanaka Aliens' Boss at which points several of them jump upon Kurono and two off them start biting and tearing into him at his neck. He then grabs one of them but instead of squashing it he puts it down on the ground. As he backs away from the boss he accidentally steps on one of them but quickly realizing his mistake he lifts his foot leaving it unharmed. The boss then angrily confronts Kurono, who responds by threatening the boss with his gun, telling the Apartment Tanaka's to not come any closer. It then dodges Kurono's shot, leaving Kurono no choice but to take out the buildings walls and floor making it collapse thereby presumable killing the lot of them.

The Hatchlings as seen in the Manga

The Hatchlings as seen in the Anime 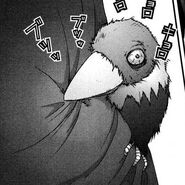 A Hatchling emerging from its egg.