Tetsuo Hara (原 哲男, Hara Tetsuo) was a member of the Osaka Team, and part of the Sadistic Trio. He died during the Nurarihyon Mission.

Tetsuo Hara was shown as part of the Osaka team during the Nurarihyon Mission. Being part of the Sadistic Trio, Hara was a prominent fighter, easily killing several aliens without much effort.

At some point, the sadistic trio engaged in combat with the Vampires and the Samurai Yokai aliens. During one point, Hara tried to attack the female samurai from behind, only to get decapitated by the male samurai. 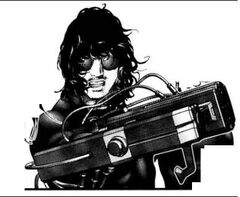 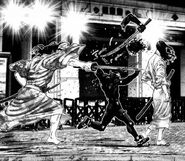 Tetsuo Hara dies.
Add a photo to this gallery
Retrieved from "https://gantz.fandom.com/wiki/Tetsuo_Hara?oldid=23804"
Community content is available under CC-BY-SA unless otherwise noted.