Gantz Wiki
Register
Don't have an account?
Sign In
in: Male characters, Deceased characters, Characters who ever appeared on the Tokyo Gantz team

None
Tetsuo Nemoto (根本 鉄男, Nemoto Tetsuo) is a member of the Tokyo Team also known as the Gantz Team in one of their missions, dying after the one he participated in.

Tetsuo is an thuggish looking 31 year old of average height and black hair which is dyed red on the top. He wears average clothes consisting of shirts and jackets, in the anime he is also seen wearing a construction site jumpsuit and helmet. He also wears the Gantz suit in the mission after Kei Kurono tried to steal his, convincing him it was a good idea to put it on.

In the anime he was a motor bike gang member during the night and a construction site worker during the day, in the manga he is just a thuggish motor biker who bullies random people for the fun of it. He then along with three other members of his Zoku Biker Gang get into a fight with a much bigger Rival Biker Gang who kill the four of them making them end up in the Tokyo room.

His appearance in the anime and manga have a big difference. In the manga, he acts like his other gang members and harasses Kishimoto, and goes to peek at her when she gets changed, being stopped by Kato before he can do anymore. He later tries to rape Kishimoto after everyone else has transferred out of the room, thinking that he and Kishimoto were the last ones left. After getting his pants down and being in the process of undressing her, he gets transferred out of the room. He is as vulgar and uncaring as the other bikers, only caring about his wife and son out of a small sense of obligation and to have ready pussy. He also went as far as treating to kill Kurono and sending him to his death in the lair of the Tanaka Aliens.

In the anime he is much different. He hates Haruya from the get go and says 'no it sucks being an asshole' in retort from Haruya saying 'it must suck being a biker with a wife'. He gets violent with his fellow bikers when they badmouth his family and later stops the other bikers from raping Kishimoto when she goes back alone to change, saying it isn't right, and gets in an argument with them. He also cares about his family more in the anime and appreciates the value of life more. In addition, Tetsuo and his fellow gang members are shown to have jobs as construction workers, which was never shown or even implied in the manga.

In the anime he says he will help Nishi if he apologizes for killing Kosuke Nakajima, showing that, in this version, he does care somewhat for his fellow bikers. In the manga he just laughed and never mentioned anything about Kosuke. Another difference is that while in the manga, when Ryota starts sobbing after Nishi's death, Tetsuo, along with Haruya, demands that he stops or he'll kill him; the anime version changed the scene to the bikers having an argument about children's naivety (with neither of the Sugiharas being there) and how Tetsuo couldn't do anything to stop Kosuke and Shinsuke's deaths.

He is first seen with his gang of six, driving noisily through the streets, they then stop at a convenience store and there they bully a father and his son by forcing the son to take down his fathers pants and underpants after beating the shit out of him. They laugh about it and go home, where he tosses his infant son Eikichi Nemoto in the air catching him while talking with his wife Haruka Nemoto he gets called by his biker friends to come and meet a hot girl, he tells his wife he goes out for cigs. As they meet up a Rival Biker Gang shows up showing them it was all a set up they then get beaten up, killed and sent to the Tokyo room.

He then demands to know what is going on, he then check out Kei Kishimoto and tells Ryota to shut up. Masaru Kato then explains what is going on regardless of Nishi's anger. He just laughs about it, not taking it seriously at all. They then check out the suit and weapons. He then goes to peep on a changing Kishimoto but is stopped from doing more by Kato. Kurono then tries to steal his suit which convinces him to wear it, for which he gets made fun off by his fellow bikers. Kosuke Nakajima then shoots an x-rifle at Nishi two times, but nothing happens. Nishi however retaliates with his x-gun blowing up Kosuke's head, he then warns them that any person who shoots him dies. Before asking Gantz to send him out first.

He then gets send outside near the Shopping Tanaka Alien and remarks it looks nothing like an alien. After Nishi shoots one of the Tanaka Alien Hatchlings it starts fighting him, as Nishi calls out for help, he just laughs at him. As Kato goes to save Nishi he and the other new hunters try to leave the game area but Shinsuke Nishikawa's head gets blown up forcing him back into the game. They then meet up with the others who just defeated the alien, Kato then comes to understand there are more of them. Getting annoyed at Ryota's screams he and Haruya Numata are about to shoot him and his grandmother Kayo Sugihara, when Kato stands up and tells them what they should do if they want to be free. Kato then leaves Kurono since he doesn't have a suit and he and Haruya double back and force Kurono to start walking, they attack him during which Kurono gets a gun which he hides from them. They then bring him to the Tanaka's lair and force him to go inside, alone and unarmed. In the anime Tetsuo is displeased with Haruya when he does this. Tetsuo's exact line when Haruya is 'you're a real piece a' shit you know that?' although he goes along with it anyway and does nothing to help Kurono even after Haruya stops holding him at gunpoint.

He and Haruya then try to chicken each other to go in, but they both do not move thinking Kurono most likely is death already, they then see Kurono fall through the floor and run out towards them as the entire building collapses behind him. Kato's group then catches up with them and Kurono tells him it is all over at which point Haruya is grabbed and killed by the Tanaka Aliens' Boss. After which it confronts Masanobu Hojo and fights Kurono just to be killed by him, After its death he is the first to be sent back to the Tokyo room.

Back in the room he steps away from Hojo as he is called Homo by Gantz, then he gets angry when he scores 0 points and gets called freak parade by Gantz. After the scoring is done he is glad he can go home now and he eagerly leaves uncaring about the fact he just lost three 'friends'. While fucking his wife after coming home she finds the X-gun under his pillow, she grabs it and asks him what it is and if it some kind of toy and if he bought it. He tells her he found it and didn't buy it and that it looked cool and not to point it at him. He then goes outside to try the gun out, while aiming at a Stray Cat but instead thanks to the delay the wall behind it blows up. He then tries it out on the same wall several more times and on a random bike. He then calls Mr. Iwaki a loanshark he owns money to, he then offers up the guns as payment, he doesn't buy it also thinking it is a toy. He then demonstrates the gun's power but has a change of heart thinking himself the strongest man alive he shoots Mr. Iwaki instead killing him. He then goes to look for the Rival Biker Gang and he walks into their midst as their first member comes to attack him he pulls out the gun and shoots, but nothing happens he then tries to shoot again but the gun is jammed. He then gets beaten to death and dies with nothing else happening afterwards.

In the anime, the circumstances surrounding his death are far more sympathetic. After killing Iwaki and returning home, his wife and he get into an argument when he learns that he was fired from his construction job for not showing up. She also gets angry that his phone was turned off and that she couldn't reach him, and accuses him of adultery. Fed up, Tetsuo points his x-gun at her and threatens to kill her. Thinking that it's just a toy, she dares him to, but he is unable to go through with it after their child wakes up. He later goes out for milk (since his wife can't breast feed due to inhaling too much paint thinner) and is surrounded by the same gang members who killed him before. It is suggested in this version that he's trying to end his life (even though he still has the X-gun with him), as he asks himself 'Why am I doing this?'. He then screams 'Tell me why, Gantz!' and Gantz blows his head up, with Kishimoto's words about there being bombs inside their heads echoing in his mind. The tragedy is intensified when his wife phones him as he's dying, telling him to come home since she is finally capable of breast-feeding. His last words before he dies are 'No need for me anymore'. Then his head is blown up by Gantz.

Tetsuo shows little fighting skill or ability, he just charges in,punching and kicking without and though behind he is also seen generally avoiding physical confrontation feeling only secure to do so when he has other people with him to back him up or a superior weapon. During the mission he is on he does nothing, choosing instead to force Kurono to take a massive amount of risk even though he is wearing a suit and Kurono isn't in this he is shown to be sly and cowardly. He isn't physically fit or unfit nor is he a great thinker, having no care about the consequences of his actions, he also shows no real skills and abilities in the manga. 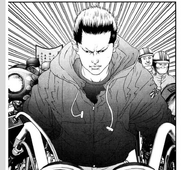 Tetsuo as seen in the manga

Tetsuo as seen in the anime

Tetsuo as seen during the scoring

Tetsuo showing aggression to a child.

Tetsuo taking a peak at Kishimoto.

Tetsuo stopping the others from raping Kishimoto

Community content is available under CC-BY-SA unless otherwise noted.