01. It's the Beginning of a Brand New Day

Yoshino is Kei Kurono's hot homeroom teacher he always fantasizes about. She is seen throughout the anime. She is first seen in the first episode teaching her class, when Kurono daydreams seeing her naked and looking at her breasts. He then gets an erection. One of the students notice this and snitches and she tells him to do that after school. She was having an affair with a married man, with him she was seen during the Budha Temple Mission, having an argument with him about leaving his wife. Eventually his wife finds out and she stabs Yoshino in her side, she then continues to chase her out on the street with her knife and eventually kills her by stabbing her several more times. She is the first one, besides the bum hunters to point her gun at Kei with the full intent to shoot. However after Ryuji Kajiura takes Mika Kanda hostage, she has a change of heart and lowers her gun. After Kei and Mika get out of the room followed by Ryuji and Hajime Muroto she is then seen as they confront the two. Eventually she points her gun at Ryuji demanding he put his gun down. Kei then jumps out and attacks Ryuji. Who fights back and takes her hostage. Regrettig her former actions she pulls a gun out of Ryuji's holster and point it at his face. As the others approach the three of them, he headbutts her. They then run away with her into the titty bar, where they sexually assault her by ripping her clothers and cutting her up. Ryuji getting tired of both Hajime and draggin around a hostage, releases her by pushing her. As she falls Kurono runs forward and catches her. She then confesses to him saying that she knew that when he got hard ones in class that it was due to her and that it got her off how hard she would make him. She then charges forward using the last of her strenght, trying to kill Ryuji by slicing his throat. However she misses and slices his forehead instead. After that she is killed by Hajime shooting the X-gun at her several times. She is last seen on the station in episode 26. 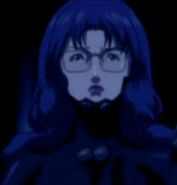 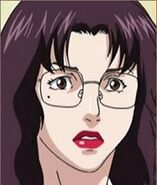