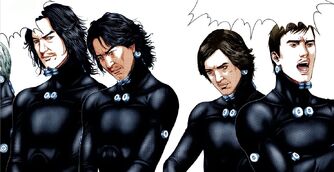 As Nishi describes them in chapter 329:
The group of Zaibatsu big wigs are Japanese businessmen, who worked out their plans for Katastrophe a long time before it happens, to take over the world.

They somehow managed to hack some of the Gantz balls thus capable of using most of their functions, like transferring any Gantz hunters anywhere they want to. They use the balls' power to force the other Gantz hunters to obey them.

Retrieved from "https://gantz.fandom.com/wiki/Zaibatsu?oldid=12080"
Community content is available under CC-BY-SA unless otherwise noted.